The early days of Serendipity were lonely. None knew its impact on R&D, Projects and Daily Life

The BSA is the outcome of 15 years of unintended research in the projects that I have been working on from 1999 unitil 2014.  My focus all those years ( 1999-until now ) was to build a software generator to speed up planning and estimating of projects. My goal was to do that in 3 minutes! I need that kind of speed to build my second dream that is the World Trade Port.

In 2001-2002 I found out that efficiency, with the definition of  "reaching goals at the cost of nothing" is a key. In 2004 I stumbled on the word Serendipity in de KIVI-building in the Hague. It was an article in their engineering magazine "Pt Aktueel". Serendipity will only occur if you are searching/investigating something with dedication and focus for quite a time. Then you get/see something else which is more valuable then the thing you were searching for ( I was and am still searching for the 3 minute Generator!! )

In 2006 at Chevron ( roof ) at Voorburg I realized that I was always busy with Project which can be defined in short as P=Goal x Will x Way.

So I had 3 words with Goal in it. In that same year I made the ESP-Model ( Efficiency, Serendipity,Project ) See document 1

I tested the ESP-model at Havenbedrijf Rotterdam and Shell Schoonebeek in 2007-2009. Then I received a phonecall with the question whether I am interested in a planning job at Rijkwaterstaat. Although I had a busy agenda I said "Yes"....and next monday I started at Rijkwaterstaat Westraven. The project was called "Spoedaanleg wegen" for the "Crisis en Herstel wet". 30 road projects (about 4 billion euro ) through the Netherlands. They use the Credo : Fight for Every Inch" for the projects. It was difficult to manage al the project with a planning software so I made it simple for the projects to follow up the plans of 30 projects. See document 2

"Accidental" discovery of the Law of Murphy on internet.

In 2010 while working on the 30 projects program another project "The Haringvliet and Volkeraksluizen" needed some planning assistance. Again I said:"Yes". For them I also build a simple plan to follow up their project. But this time I build the Law of Murphy around it to proof that Skill ( you are effecient when you are Skilled ! ) leads to Luck ( Serendipity ). Is used this model  also on The new A50 river Waal Bridge...and also successfull. See document 3

BOFFINS have finally proven mathematically a rule that everyone knows is perfectly obvious each time their e-mail crashes on a deadline or the shower runs icily cold.

A panel of experts commissioned by British Gas - a psychologist, a mathematician and an economist - has discovered the statistical formula for predicting Sod's Law occurrences: ((U+C+I) x (10-S))/20 x A x 1/(1-sin(F/10)).

And they found the original Sod's Law - 'Anything that can go wrong, will go wrong' - is only half the story. They also found a new rule, after testing the formula on over 1,000 people's experiences - 'Things don't just go wrong, they do so at the most annoying moment'.

This explains why your e-mail will most likely crash as you try to send something important, chances are highest that you will spill a drink down your clothes before a date and it's a safe bet your heating will most often break down in a cold snap.

Previous studies have shown Sod's Law isn't a myth - toast will fall butter side down, odd socks do breed and string can tie itself into knots. Now the British Gas formula allows people to calculate the chances of Sod's Law striking - and try to beat it.

Anne Morton, of British Gas said: "In our experts' tests, the mercilessness of Sod's Law emerged. Not only do things go wrong, they do so when they are most likely to drive their victims up the wall.

"For example, Sod's Law shows how cruel it can be when it comes to the shower turning cold just as you've shampooed. Men aren't bothered, and so the chances of it happening to them are low; women hate it and it happens far more to them."

Spilling something down yourself before a date and the boiler breaking down in a cold snap are both the most likely and most annoying events.

After the Waal Bridge I did the scheduling of several Tunnels ( in Maastricht ( Avenue2) and Nijverdaal ), a road project in Groningen  and also the Galecopper Bridge in Utrecht. And on the Avenue2 tunnel project I stumbled on the Black Swan Theory of Nasim Taleb. Since I am "Blue" one ( mixed persons from Indonesia are called that way ) I named my theory the Blue Swan Theory a mirror to the Black Swan. I tested the Blue Swan on projects mentioned above. See document 4.

My presumption is that there is a mirror law for every law. Take the famous law of Einstein E=Mc2 . It holds lot of energy . It's mirror law is E=Pm2 ( P=project or Plan and m2=Management Method ). When m2=efficient a lot of serendipity with potential Quantum Leaps can be freed out of the Black Box (E). This is something for scientist to think about..."To boldly go where no one has gone before"

The End Result is "The end of History" or the Multidimensional World. 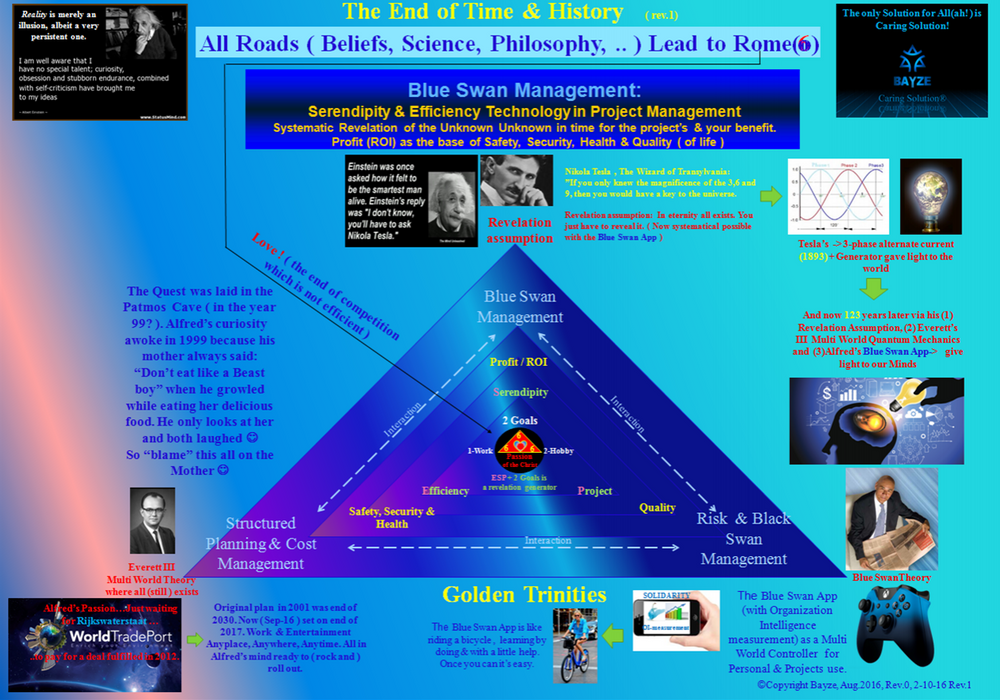 30 projects ( 4 Billion Euro's ) in a simplefied schedule ( Efficient! ). The project was a success.

Saturn V ( Houston we've had a problem, 1970 ) used on the Haringvliet/Volkerak Sluizen and on The new A50 river Waal Bridge. 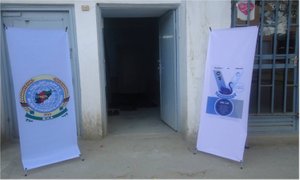 The Blue Swan Theory landed in Kabul, Afghanistan and is spreading ever since all over the world.

Below: Teaching the Blue Swan nov.15 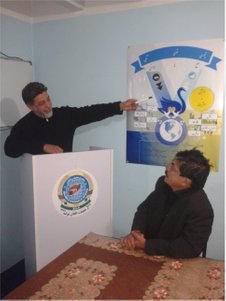 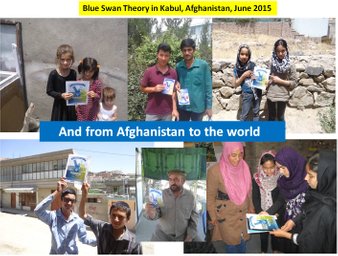